The President stated that the appointments went via both the Judicial Council and the Council of State in a letter to Parliament that was read to the members of Congress by Speaker Alban Bagbin.

Along with one High Court Judge, Ernest Yaw Gawu, the names on the list include three current Court of Appeal judges: Barbara Ackah-Yensu, Samuel Adibu Asiedu, and George Kingsley Koomson.

“The Council of State informed me of the successful conclusion of the consultation process in a letter dated July 25, 2022.

Parts of the letter stated, “I am requesting the consent of Parliament for the appointment of the nominees as judges of the Supreme Court in accordance with Article 144(2).

In the letter, President Akufo-Addo pleaded with the House to hasten the confirmation procedure so that the nominees could begin working right away.

“I am confident that each of these people have the necessary qualifications and inherent fitness to carry out the duties of a Supreme Court justice. 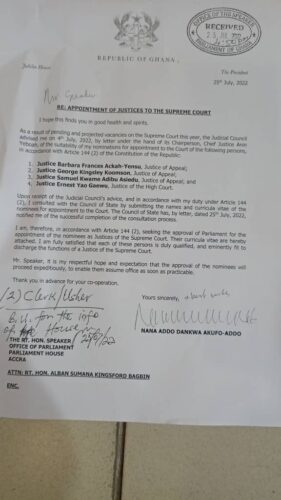 Mr. Bagbin stated, “Mr. Speaker, it is my humble expectation and hope that the approval of the nominations would proceed swiftly to enable them to begin office as soon as practical.

The appointments have already been sent to the Appointments Committee for review and a report by Speaker Alban Bagbin.

With this most recent nomination, President Akufo-Addo has now appointed 15 people to the supreme court.

Previous Sagong community set ablaze due to reoccurring fighting between Anufors and Konkombas
Next Regarding corruption at the NDA, Special Prosecutor invites the Coordinator for Special Initiatives at Jubilee House