The task of carrying out the vision of eminent Ghanaian politician, teacher, and king Simon Diedong (SD) Dombo has been given to vice president Dr. Mahamudu Bawumia.

Chief of Duori, Naa Dombo III during a courtesy call on him by the Vice President as part of his official working visit to the Upper West Region, tasked him with the responsibility of pursuing to the letter, the vision of the late Member of Parliament for Jirapa-Lambussie, who was a key founder of the Northern People’s Party, the forebears of today’s New Patriotic Party. 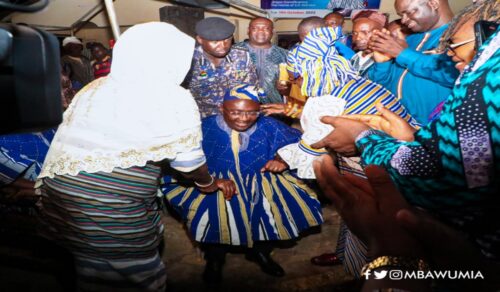 According to him, the family acknowledges his contributions in re-igniting the link between the two families that championed the vision of the tradition.

He described his intervention as timely and prayed God grants him the strength and fortitude to soldier till the dream of the two families that started decades ago is achieved.

“We acknowledge your intervention in re-establishing the link between the Dombos and the Bawumias. I am by this tasking you to pursue the vision of your father Dombo from where he left off. You have henceforth been tasked with the responsibility as a true son to achieve this dream that was birthed decades ago”, he charged.

Naa Dombo III also bestowed on him a Chieftaincy title “Leweh” to wit “the chief (Dombo) has returned”.

He explained that it was as a result of the traits of the late SD Dombo seen in Dr. Mahamudu Bawumia that led the Dombo family to honour him with the title to encourage him to achieve his assigned task. Dr. Bawumia was also named as co-Chairman of the SD Dombo Foundation.

An elated Bawumia later paid glowing tribute to one of the pillars of the NPP at his graveside where he laid a wreath and prayed for his peaceful repose.

The late Douri-Na was thought to be Ghana’s Upper Region’s first chieftain with a formal education.

Along with Mumuni Bawumia (the vice president’s father), he helped form the Northern People’s Party and served as its first chairman.

The United Party was created after the Northern Peoples Party combined with other organizations.

Following his election in the 1969 Ghanaian general elections, Dombo served as a representative for the ruling Progress Party in the first Parliament during the Second Republic.

During the Busia administration, he served as Minister of Health and later Minister of the Interior.

Previous Government is investing $740 Million in water systems, increases access to clean drinking water to 87% – Dr Bawumia
Next Mahama says the president’s budget must be slashed