Government and organized labour agree on 15% Cost of Living Allowance

The government of Ghana and Organised Labour have agreed on a 15 percent Cost of Living Allowance (COLA) (COLA).

This takes effect from July 1, 2022 and will continue until the next negotiations.

On Thursday night, the government side and Organized Labor finished their negotiations.

This information was released to the media on Thursday night in Accra (July 14, 2022).A 20% COLA was what Organized Labor had requested.

Employees in the educational sector started a strike on July 4, 2022, in opposition to the COLA.

Therefore, Dr. Yaw Baah, the Secretary General of the Trade Unions Congress (TUC), has urged the workers who began the industrial action in the education sector last week to put pressure on the government to allow the COLA to resume work.

Ignatius Baffour Awuah, the Minister of Employment and Labor Relations, stated during a news conference on Thursday night that “at the end of the negotiations they came up with a joint communique.”

At the press conference, the statement was signed by Mr Ignatius Baffour Awuah,the Minister of Finance,Ken Ofori-Atta and Dr Yaw Baah signed on behalf of the TUC.

To discuss their requests for the payment of the Cost of Living Allowance(COLA) to members,the leadership of organized Labour was summouned to a meeting by the Ministry of Employment and Labour Relations. 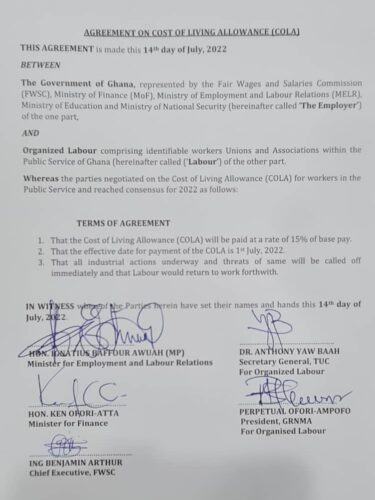