He specifically criticized the Akufo-Addo administration for not doing enough to revive the faltering economy and provide relief for Ghanaians who were suffering.
His remarks follow the recent downgrading of Ghana’s global and domestic credit ratings by Standard & Poor’s (S&P) from B-B’ to CCC+C with a bleak economic outlook.

S&P claims that increased finance and external pressure on the economy were to blame for the rating.
With the current reduction to CCC+/C junk rating, John Mahama stated in a statement that “there appears to be no end to the challenges with the Ghanaian economy.”

The only way to stop what has turned into a disturbing trend, according to Mr. Mahama, is for essential parties to engage in a collaborative conversation.
He claimed that the recent mid-year budget review and the unstable currency do not inspire confidence in the economy.

John Mahama said on Facebook that “Unfortunately, no credible remedial plans have been put forward by the government to salvage the [ailing] economy”. 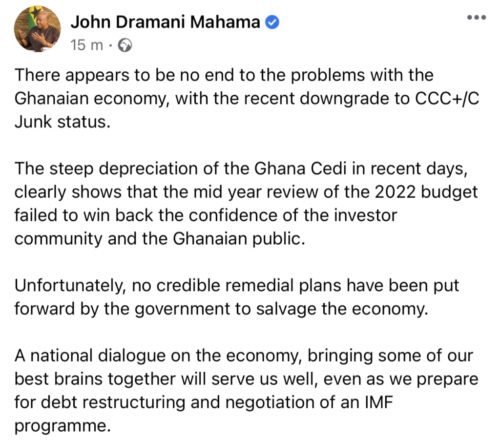 S&P claims that increased finance and external pressure on the economy were to blame for the rating.
Even though he acknowledges that things are difficult, Nana Akufo-Addo asserts that things would improve for the nation’s economy soon.

The President was broadcasting on a Tamale-based radio station.
“Yes, the difficulties are there, and I want to minimize the difficulties that are affecting the lives of ordinary people in a very negative way. What I am saying to the people of Ghana is that, they should continue to have confidence,” the President stated.

The judgment of the credit rating agency has already been met with dissatisfaction by the Finance Ministry.The administration has reportedly made some proactive steps to rebuild the economy despite the effects of external shocks on the world economy.