Beneficiaries of the Nation Builders Corp (NABCO) had planned to picket at the Jubilee House on Tuesday, September 20, but the Ghana Police Service has put a stop to it.

The group’s executive team revealed this.

Last month, the members demonstrated in Black Star Square to pressure the government to pay the 10-month arrears owed to them.

They do, however, claim that they haven’t heard anything encouraging about when their allowances will be paid.

Dennis Opoku Okatakyie, the president of the NABCO beneficiaries, stated in a media interview that they will soon decide on their course of action.

“Leadership met with the Greater Accra Regional Police Command to discuss the picketing at the Jubilee House. But to our surprise, the Police indicated that picketing at the Jubilee House is not possible because the area is a security zone and for some security measures they are not going to allow us but rethink and go back to Independence Square, but we didn’t agree.”

Given that the government had failed to grant them the allowances they were entitled to under the recently concluded program, the group lodged a fresh notice of picketing outside Jubilee House.

It expressed concern that previous protests it had organized had not produced any results in a statement.

The same problem persists despite exhausted all available options, including the recently held picketing and the government’s allotted time frame for paying our debts.

It is evident that the administration does not care about our welfare, according to some passages in the release.

The protest would follow the Coalition of NABCO Trainees’ recent one on September 6, 2022, which was staged following the NABCO program’s official termination on Wednesday, August 31, 2022.

The recipients claim that the prolongation was largely responsible for the allowances not being paid.

Read the statement they issued earlier below: 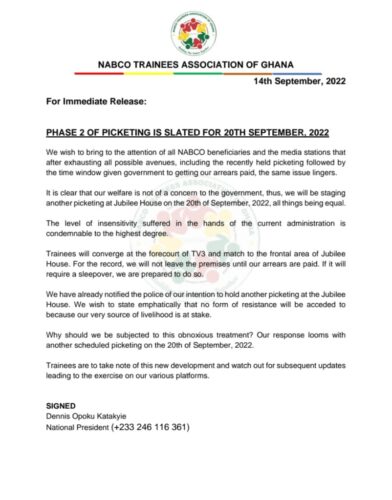